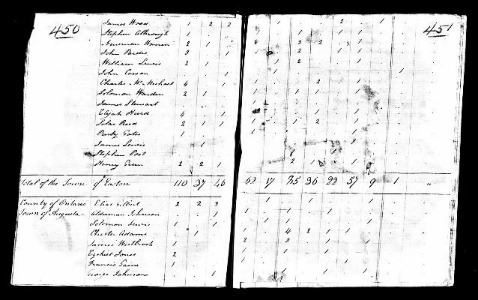 In 1790, when the first federal census was taken, Yates County did not exist. There were, however,  inhabitants of the area and they were enumerated in districts which were then part of Ontario County. To use census records properly, you must know the name changes that have occurred as new towns were formed.

1790-1820 microfilm only; Ontario or Steuben County, depending on the town;

1825, 1835 and 1845 microfilm and recreated paper copies; 1825 missing Barrington and Starkey (towns not yet part of Yates County; photocopies available from Steuben County originals). 1845 missing all towns except Barrington, Italy and Potter.

1880 long form on microfilm only; recreated book contains names and ages only.

Because of their fragility certain of the original censuses held by the County are available only on microfilm. Some other censuses exist only on microfilm, or the originals are held by other counties. Copies of all extant state (through 1925) and federal (through 1910) censuses taken in Yates County towns are available for public use in the Record Room of the Yates County Clerk; all are indexed.

Some of these indexes are now online and more will be added very soon.