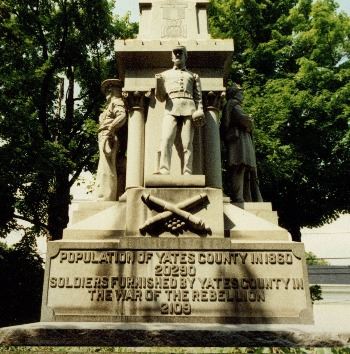 From the original founding of Yates County in 1823 through the present, county residents have answered the call of military duty. Veterans of every single war in which the United States was involved are represented in the County's cemeteries. During the 19th century all able-bodied adult males were required to train with the local militia, and this service was monitored at the county level. Service in 19th-century wars was for the most part regulated and coordinated by the state through the county government, and the military census done in advance of the United States' entry into World War I was created the same way. A number of records having to do with the military service of the County's residents are held by County agencies. They include primary and secondary sources.

Some years ago two books were discovered wrapped in paper and labeled "ledgers." These books were in reality two surviving books of pension applications and as such they have made a great deal of military and other information available about Yates County Civil War and War of 1812 soldiers and their families.

Although there were evidently several other books originally, these two survivors are Book 2, volume 1 and volume 4.

In the year 1917, with an all-encompassing war already three years old in Europe, a military census of men between the ages of 18 and 45 was taken. It was used to make up a draft roll when the time came to send American troops overseas in 1918, but it was billed at first as a census of all men eligible for the militia.

Two exact handwritten duplicates of Yates County's roll exist, separate alphabetical lists of men for each town. The information included on each man is the date of enrollment, his name, his town or city of residence, his street address or RFD, his age, his date of birth, his occupation, and details on his previous or existing military or naval service, including his original date of enlistment, his date of discharge, and his grade or rank.

These documents are not yet available as scanned images but our office can provide a transcript of a given record upon request.